Like many regular players of 4X games, we think diplomacy features are one major area where the genre has failed to innovate. Interactions between races come down to the same old system - carbon-copied poorly from classics like MoO2 or the early Civilization games - with few interesting choices to be made. Diplomacy has become the ultimate also-ran of 4X games.

For better or for worse, we intend to change that. In this dev diary, I will be talking about the basic principles of our influence and diplomacy system and how we hope it will improve the gameplay as a whole.

The artwork shown in this post is temporary dev art created specially by Firgof. The final game may or may not feature a variety of differently colored tentacles as the only playable races. 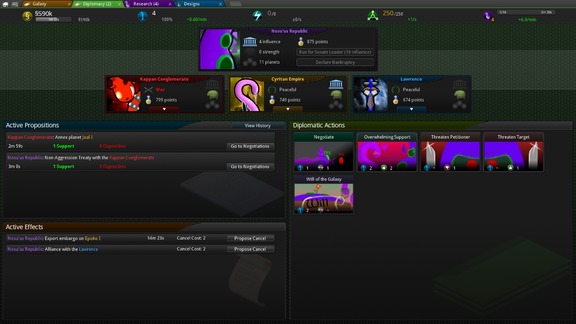 This is the diplomatic overview of the great Nosu'us Republic. From the time they spend as the tiniest purple strings in the ground, each member of the Nosu race has only one goal: To prove that theirs is the greatest tentacle nation in the universe.

This screen represents the basics of their knowledge of other empires, their strengths, and the current happenings in the Galactic Senate.

Over the course of time, empires accrue ‘influence’. This represents the amount of power they have to get things done - whether gained through the support of the citizenry or through other means.

When an empire tries to find a diplomatic way to get something done, they do so by petitioning a proposition. During this proposition, empires can employ Diplomatic Actions to try and sway the opinion of the public and the Senate in their favour. The Nosu'us have a limited choice of diplomatic actions right now, but as the game progresses they will earn different types of actions through improvement or circumstance.

Let's take a look at a couple of the actions available to us.

Each action has an Influence Cost: the amount of diplomatic capital that needs to be spent in order to successfully execute it. It also has a Weight, which represents how heavily that action sways the proposition in one direction or the other. 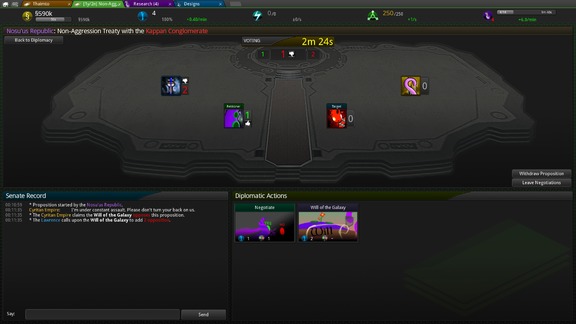 The negotiations screen shows how empires are leaning on a particular proposition, and is used to play diplomatic actions and negotiate with other empires. It seems that the Cyritan have managed to convince our ally, the Lawrence, to oppose this proposition together. They have used the “Will of the Galaxy” action to sway the proposition in their favor.

Fortunately for us, the Kappan want a non-aggression treaty as well, so we spend some of our influence points to negotiate to swing the proposition back towards passing. 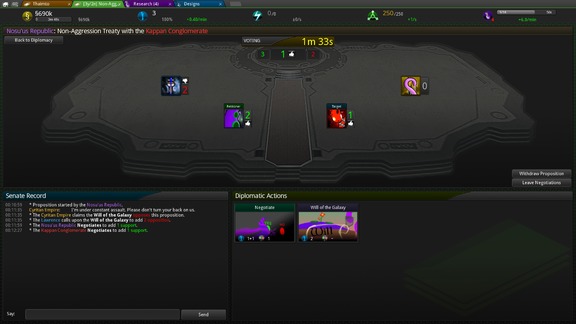 The Cyritan are desparate to stop this peace treaty from happening. In a risky move that could put them at war with both of us, they declare that the friend of their enemy is also their enemy, and threaten to fight us as well. 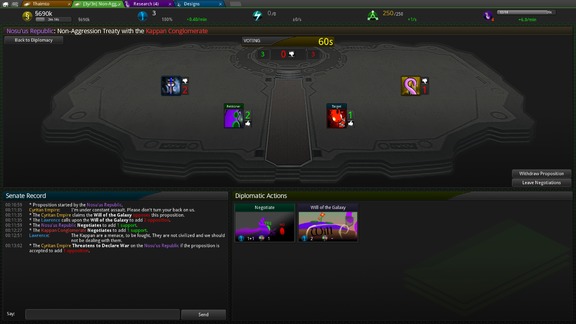 The Nosu'us are a proud race, and would not normally give in to threats of this nature, but we value the alliance with our friends the Lawrence, so we will let it go for now. 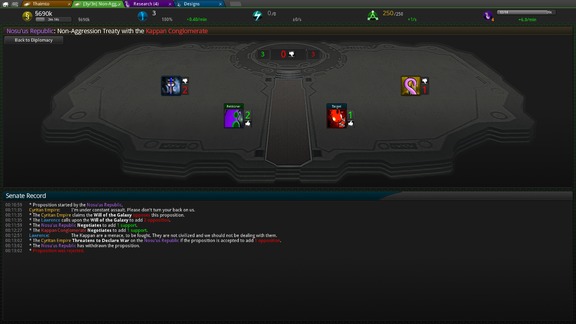 The goal of SR2's diplomacy system is to give players things to do that affect the state of the universe in interesting and meaningful ways - not just inside the diplomacy system itself but through all of the game's mechanics. Diplomacy can be used to annex planets, instate trade embargoes, subjugate empires to your will, and even win the game through galactic unification with you at the head.

We hope to create an environment where the player uses the votes and actions to support whatever goal or stance they have, rather than limiting diplomatic involvement to what the system allows.